Hurricane Dean ushered Bruce Golding and the JLP into government in September 2007. Tropical Storm Gustav commemorated their first year in office. So far, knock on wood, the 2009 hurricane season has been particularly quiet.

Then, just as things seemed to be winding down to the usual end of summer back-to-school, money-have-to-spend and government-and teachers-must-quarrel, the U.S. authorities are treating us to a whirlwind of scandal, gossip and gambling by requesting that the JLP government of Bruce Golding render up JLP and Tivoli Gardens strongman, Christopher “Dudus” Coke unto the U.S. justice system, well known for eating up Jamaica’s bad men and spitting them out again five or ten years later, no harm done.

So how good a story is the requested extradition of “Dudus” ? Let’s see how it breaks down:-

(1) “Dudus” father, Lester Lloyd Coke aka “Jim Brown” died in a fire in his cell on February 23, 1991. He was due to be removed to the U.S. to face trial the following day. Among those who remember “Jim Brown”, everyone has their favourite theory as to who ordered the death of “Jim Brown” – e.g. some say he committed suicide; some say Seaga ordered his death to conceal his ties to the JLP; some say he was killed by his cronies who had no doubt that he would sing like a bird once he was in a U.S. prison.

(2) The history of the extradition treaty between Jamaica and the U.S. since 1991 is basically about JLP dons and a PNP government. Will things be different now that “Dudus'” M.P. and the M.P. for West Kingston is Bruce Golding, the Prime Minister of Jamaica?

(3) Why is “Dudus” Coke’s lawyer, JLP Senator Tom Tavares-Finson, sounding hesitant and unsure of his ground when discussing the matter with the pro-government team at Nationwide radio ?

Where is the brash, arrogant, take-no-prisoners Tom Tavares- Finson that we have come to know (if not to love )?

Can the JLP Senator be worrying that his client’s case is all too similar to that of Norris “Deedo” Nembhard (designated a drug kingpin by George Bush, Nembhard was extradited to the U.S. in 2008, and subsequently convicted on various charges) ? Is he worried that “Dudus” will suffer the same fate as Leebert Ramcharan ?

(4) Many, many times over the years we have heard that Jamaican criminals in U.S. prisons were going to sing like birds. Remember when Vivian Blake was going to ensure that dozens of Jamaican politicians and “well known businessmen” were discredited, arrested, extradited to the U.S.? Going to rot forever in an American jail ?

Instead, a mere 9 years after he received 28 years in prison, Vivian Blake is back home in Jamaica .

(5) “Dudus” has supposedly got cover from “his” government. Under the PNP, this kind of “harassment” was par for the course. Nowadays, “Dudus” is a respectable businessman who is rewarded for his loyalty in the usual manner: a few government contracts here and there.

So, what will his “coverage” be worth ? Can Prime Minister Golding really hide “Dudus” from the U.S. authorities behind his government’s skirts ?

What are the odds on his extradition being delayed by the Senator? For one year ? For at least four years ?

So, what’s your take on this ? Where are you putting your money ? 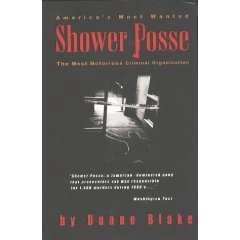