Jamaicans go to Cuba to be educated, have eye operations, have cardiac treatments, do business, have fun, practice their Spanish, listen to music…..

Cubans come to Jamaica to (1) distribute light bulbs (2) work until they can find a way to get to the United States.

While lots of Jamaican tourists rave over Cuba (the people are so educated, the place is so clean, they keep up their old buildings….) nobody ever plans on moving there. Like the Cubans, if we’re leaving home it better be for Miami or New York ……

We also hear a lot about the dark days that will overtake Jamaica the moment that Cuba is freed from its communist toils.

From that moment on, we’re told, every single tourist between L.A. and Vladivostok will head to Cuba to soak up the sun, drink the rum, play the casinos and whatever else, leaving us Jamaicans to sit down alone under our palm trees ruing our lousy infrastructure, ignorant populace and lack of casinos……..

Nevertheless, we have to support the Cubans in becoming a democracy a.s.a.p. (especially since it’s  possible that Fidel Castro will be more fondly remembered in Jamaica than in Cuba – at least among those PNP supporters who were big somebodies in the 1970’s…..)

There is a lot of educated theorizing by informed persons about how things are likely to go after Castro dies (see the University of Miami’s Cuba in Transition, and an article by a Cuba expert and a sample view of the European press).

What I’m not seeing or hearing is an acknowledgment that the two biggest transitions to democracy in the last 20 years were pretty much huge surprises to everyone (the experts included).

Who knew that when Gorbachev took power in 1985, he would stumble his way into dissolving the Soviet Union and letting go of Eastern Europe ? Something that was inconceivable when Leonid Brezhnev died, three years earlier, in 1982 ?

And who knew that when F.W. de Klerk took over from P.W. Botha  as President of South Africa in 1989 (Botha had had a stroke), that in less than six months Nelson Mandela would be out of prison and negotiating the end of apartheid ?

So here are my completely uninformed predictions: –

Same way that Fidel has disappointed the hopes of all his enemies and detractors for 47 years, same way he will disappoint them again by preparing for a transition to democracy while he’s still alive…..

And/or, when Fidel dies, it will turn out that he has made preparations for his successor (Raul or whomever) to make the transition to democracy as soon as everyone reaches home from the funeral…… 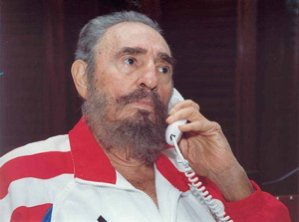 In the meantime, let’s drink to Cuba Libre. Pass the Coke, the Appleton (I’m not drinking Bacardi, sorry) and a piece of a lime. And more ice. Thanks.