Our Prime Minister Portia Simpson-Miller yesterday finally made the speech many Jamaican women have been waiting for her to make since her inauguration on March 30.

She lambasted fathers who don't take care of their children financially or emotionally. Nothing new here, and her speech is unlikely to be any more effective than any previous such calls for male responsibility…. 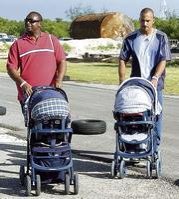 The Prime Minister and the media continue to maintain the pleasant fiction that men are primarily, if not solely, responsible for (1) pregnancies (2) neglecting their children.

Whereas, many men cannot go near their children for fear of the barrage of abuse they will receive from their baby mothers.

Many times this abuse is a consequence of their having moved on to another woman.

And many times this is a consequence of them being exactly the same man that the lady got pregnant for – i.e. not working; not minding any of his children; not responsible for himself in any situation, sexual or otherwise…

When the same nice talking, good looking man the lady wanted to sleep with turns out not be a responsible father, no one remonstrates with her. This seems to be because (1) having a child to take care of for the next 18 years is seen as punishment enough (2) it is assumed that any woman will marry her baby father, if asked nicely……(altho' as any Pastor/counselor/baby mother knows, this is not true)

I don't know what a man is supposed to do if he lets a woman know he is "wutless and wukless" upfront (and many do), and yet she still gets pregnant for him.

"Learning to Be a Man: Culture, Socialization, and Gender Identity in Five Caribbean Communities" (Barry Chevannes)

Whatever happened to that wonderful National Family Planning campaign of yesteryear called "Choose Your Baby Father" ? Was it abandoned because the men didn't like it ? Or because the women didn't ?

And if having to put up with irate baby mothers isn't enough disincentive for men intending to be "proper fathers", then the sheer cost of responsible parenthood should put them off entirely.

In fact, if the Prime Minister really wants to do something about 'neglectful men' she should ensure that the proposed Maintenance Bill to require both men and women to support their ex-spouses (including unions made under the common law) is rushed through the House. Nothing is more likely to give women pause (before getting pregnant that is) than the prospect of spending their life "minding" that lithe young man sporting gold chains and chatting nice lyrics.

It is true that some men are worried that sharing men's legal responsibility to provide for their families will make things worse, not better.

But we can't continue to pretend that in Jamaica we are living in the same gender culture as Americans or Brits. Here the fact that a man may have many children by many different mothers and is not supporting any of them does not prevent other women from deciding to have a child for him.

Similarly women who have several children by several different men do not consider that they have any obligation to maintain a cordial relationship with the fathers of their children, if the fathers have not lived up to their initial expectations i.e. regular child support.

We have tried many things – from Lady Huggins sponsoring mass marriages in the 50's to outlawing bastardy to the Family Court to DNA testing. The marriage rate has continued to fall, the number of children being registered without even their father's name on their birth certificate has continued to rise.

Maybe legally recognising the fact that the majority of Jamaicans will never marry and that the family is largely a female enterprise (with visiting males) as per the proposed Maintenance Bill is the sensible option.

And once women start taking responsibility for choosing their baby fathers, who knows ? All kinds of fathers may start popping out of the woodwork….

"Training a Tiger: A Father's Guide to Raising a Winner in Both Golf and Life" (Earl Woods)

"My Boys Can Swim!: The Official Guy's Guide to Pregnancy" (Ian Davis)

"The Black Man's Guide to Parenting: 50 Ways to Be an Effective Father" (C. F. Gipson)

"Fatherhood for Gay Men: An Emotional and Practical Guide to Becoming a Gay Dad" (Kevin McGarry)